How do you know if you qualify for TPS and Asylum? Read more to find out!

Three years ago the Arab Spring brought about winds of change, shifting the sands beneath an already unstable Middle East. Inspired by its neighbors in Egypt and Tunisia, peaceful protests in Syria surfaced against a totalitarian, socialist regime and were responded to not with peaceful dialogue but with deadly violence.  Needless to say the civil war in Syria has killed more than 130,000 people and displaced 2 million refugees, half of them children.
The situation in Syria is dire. The stories are sad. The images horrific.  Following the news from Syria can be disheartening, but helplessness breeds powerlessness.  If you are Syrian, or if you know one, empower yourself with the knowledge that Syrians have options. As depressing as it is to watch news coming out of Syria, when my first Syrian client found out her asylum application was approved, we both breathed a little easier.
Over the past two and a half years I have consulted with countless Syrians interested in learning more about what they can do to remain in the United States.  The two main options Syrians consider today are Temporary Protected Status (TPS) and Asylum:
TPS is designed as special relief to Syrians “due to conditions in the country that temporarily prevent the country’s nationals from returning safely.”  A Syrian national is eligible to apply for TPS if they can show that they entered the United States before designation date of June 17, 2013 and have maintained continuance presence in the U.S. since.  The eligibility requirements are simple and more information is available here.  A grant of TPS permits a Syrian national to live and work in the safety of the United States, but it is not a long-term solution.  In other words, when the TPS status expires, unless he or she has another way to stay in the U.S. the Syrian national must return to Syria.  If you believe you qualify for Syrian TPS but have never applied, it may be possible to late-register. As always it is advisable to consult with an attorney who is familiar with TPS.
ASYLUM:
Syrians in the United States afraid to go back to Syria may also be eligible to apply for asylum. A grant of asylum offers the Syrian national the option of remaining lawfully in the United States as an asylee.  One year after a grant of a grant of asylum the asylee can them apply for lawful permanent resident status (aka a green card) and ultimately for U.S. citizenship.  Generally, an individual in the United States is eligible to apply for asylum if they meet the following definition of a refugee:
A person outside of his/her country of nationality or outside his/her habitual residence, who is unwilling or unable to return to that country because of persecution or a well-founded fear of persecution based on race, religion, nationality, membership in a particular social group or political opinion. In addition, he or she must be able to establish that he or she is not already firmly resettled in a foreign country and must fall within certain refugee processing priorities.
If you are from Syria and you are afraid to go back from Syria, you have options. Whether it’s TPS, Asylum, or perhaps another form of relief available to you, your best choice it to consult with an experienced attorney and educate yourself.  I have helped dozens of Syrians in Syria and all across the United States in their quest for security and stability for themselves and their families. I would be happy to talk with you to explore what options are available to you and your loved ones. Perhaps it is not possible to bring peace to all of Syria, but thanks to our immigration laws, we can bring peace to Syrians in America one family at a time. 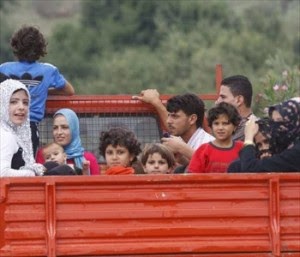